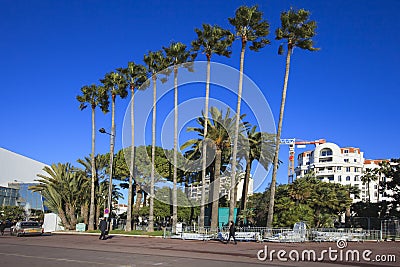 Croisette promenade in Cannes The Promenade de la Croisette or Boulevard de la Croisette is a prominent road in Cannes, France. It stretches along the shore of the Mediterranean Sea and is about 2 km long. The Croisette is known for the Palais des Festivals et des CongrÃ¨s, where the Cannes Film Festival is held. Many expensive shops, restaurants, and hotels (such as the Carlton, Majestic, JW Marriott Cannes, Chanel and Martinez) line the road. It goes completely along the coastline of Cannes. The Croisette is listed in the cultural heritage general inventory of France. Picture was taken 03rd Dec, 2012

Up view to sea, sea dock and promenade next to the town sea in Olympiada, Greece

Marseille, 7th september: Aerial view of the Promenade of the Old Port in the Bay of Marseille France

Marseille, 7th september: Aerial view of the Promenade of the Old Port in the Bay of Marseille France

Sudak, Russia, May 02, 2019: Beautiful view of the city promenade on a spring day

View on the Scheldt Quay and river promenade in Antwerp, Flanders, Belgium

A view from the promenade of boats moored in the lagoon of Charco de San Gines in Arrecife, Lanzarote