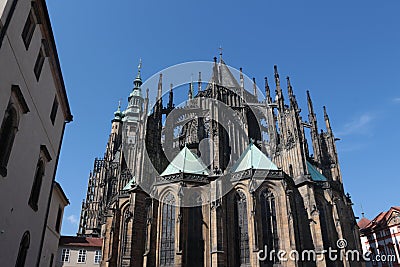 The present-day Gothic Cathedral was founded on 21 November 1344, when the Prague bishopric was raised to an archbishopric. The foundation stone for the new building was laid by King John of Bohemia. Its patrons were the chapter of cathedral (led by a Dean), the Archbishop Arnost of Pardubice, and, above all, Charles IV, King of Bohemia and a soon-to-be Holy Roman Emperor, who intended the new cathedral to be a coronation church, family crypt, treasury for the most precious relics of the kingdom, and the last resting place pilgrimage site of patron saint Wenceslaus. The first master builder was a Frenchman Matthias of Arras, summoned from the papal palace in Avignon. Matthias designed the overall layout of the building as, basically, an import of French Gothic: a triple-naved basilica with flying buttresses, short transept, five-bayed choir and decagon apse with ambulatory and radiating chapels. However, he lived to build only the easternmost parts of the choir: the arcades and the ambulatory. The slender verticality of Late French Gothic and clear, almost rigid respect of proportions distinguish his work today.

Cathedral of Saints Peter and Paul in Legnica

Interior of the Cathedral of Saints Peter and Paul, Constanta, Romania

The Cathedral of Saints Peter and Paul in Petergof, Russia

Annunciation of the Virgin Mary, detail of Iconostasis in Greek Catholic Co-cathedral of Saints Cyril and Methodius in Zagreb

Greek Catholic Co-cathedral of Saints Cyril and Methodius in Zagreb

Holy Trinity, detail of Iconostasis in Greek Catholic Co-cathedral of Saints Cyril and Methodius in Zagreb